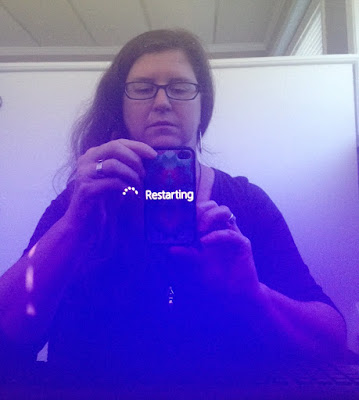 By the labeling of protesters as the hatred they speak against. The catch-22 of it.

By a call to dialogue with the Trump voters, when dialogue has been impossible from the start. Nobody’s stand has changed!

By all the nasty turns and dirty lies and violent repercussions coming now relentlessly from the Trump/Pence camp.

I feel paralyzed learning that those I believed would put humanity first, DIDN’T.

And paralyzed by the idea that, had Hillary won, we would be facing an armed insurrection. That the hate crimes would be even worse, because the racist backlash angered by eight years of Obama, would be further emboldened by an ancient misogyny. What would the protests be like if it wasn't the liberals protesting?

I’m paralyzed by smugness. From Republicans who voted for Trump simply to remain loyal to their party, now feeling victorious. From those who voted for Bernie like I did in the primaries, who chose casting blame on the DNC over casting an emergency vote for Hillary. From those who were conned and will never, ever admit it.

By all the faults of all the parties and all the hypothesizing.

By a system that I’ve never fully trusted.

By my habit of turning to social media hoping to find empowerment or community or action, and instead, feeling paralyzed.

By my concern for my daughter, a college freshman, who, the day after the election, was called a pussy by a group of men in a passing car. By my concern for my seven year old son, who must never accept Trump's example as an acceptable male standard.

I feel paralyzed. But I know that I mustn’t be.

I know that it’s time to design my plan of action, to do the work of upholding what is at risk, to watch and defend and report. These things have been important all along, but this feels like last call.

While I am jolted by fear, I know too that fear is what played into the (small) hands of Trump.

It’s time to lift our great bright light shield against the doom, to be victorious in other races aside from the presidential race, and to gather the love.

Because a great wall of love is what the haters will come up against.

And no one builds a better wall of love than us.
Posted by zoe krylova at 9:43 PM 0 comments