this mom steps into december

tonight i was having another difficult run at trying to get tristan to fall asleep at a reasonable hour. we were away for the week of thanksgiving and his sleeping schedule, such as it was, became even more erratic. rather than spending an hour pacing around the bedroom and singing to him, i gave up a half hour into it and brought him back downstairs. i was feeling rather grumpy, and even though i didn't force the issue of sleep, i also didn't sit down and join him when he pulled out the playmobil basket. he chattered at me in his cheerful curious way, and i remained distracted and terse while sitting at the computer. a while later he crawled into my lap and was ready for slumber.

once he was tucked into bed i came back downstairs and started placing all the playmobil pieces back in the basket. among the random people and plants and accessories i came upon a line of creatures placed very precisely in a row, their heads down, grazing most likely. bovine, a pink baby unicorn and a reindeer.

all the annoyance at a rebel toddler fell away, and all i could feel was love, admiration and mourning for moments lost in angst. there was something so precious about the way he lined those animals up, something so pathetic that it took place right under my nose and i didn't notice until he was in bed, and something so perfect in the presence of the reindeer this last eve of november. a few things crystallized for me in that moment of staring at this row of animals. 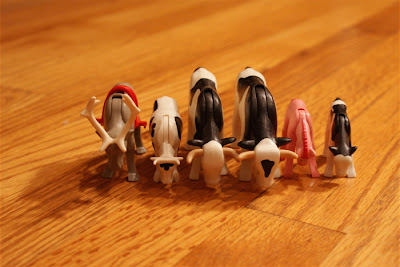 a while back durango mom inspired me with her october challenge. i was not ready at the time to join her, and i really don't know if i am ready now. but if it seems like there is ever a time to do some things to keep oneself grounded and healthy, it might be the month of december. so i am planning a december challenge of sorts.

body: yoga every day, even if it is one single pose. sit ups every day. the muffin top has got to go. one three mile walk a week. i live at the foot of the blue ridge mountains for pete's sake.

home: turning the back room into the room i want it to be and reordering the three closets downstairs. i function so much better when my work/living space is wisely used and in order.

technology: limiting my time on the computer during tristan's waking hours. i have a way of playing with him, and then wandering over and getting lost in the junk, returning to him, and then back to the box. turning it off completely around him would be the best thing. i am still figuring out when it will be on, but for starters, it will be off a lot more.

mind: all of the above, with some good reading, writing and moments of reflection added in!

there will be a lot going on this month with sewing for a couple of holiday markets, and preparing for the solstice season. i am so very behind when it comes to the gift gathering/making. so a few things need to be cut out, and a few things need to be added, all in the hope of remaining balanced and healthy. and so, december challenge, we're on! 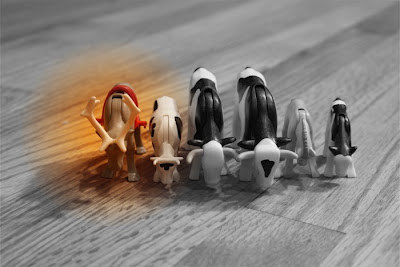 i went to one of my favorite thrift stores yesterday in search of vintage sheets. i'm making some baby blankets from thrifted linens for a hip holiday gifts sale, and am seeking some more fabrics. unfortunately i had no luck what-so-ever in the linen department, but i did stumble upon a chair. it matches our burgundy and olive living room furniture, and for ten dollars, is in excellent condition. 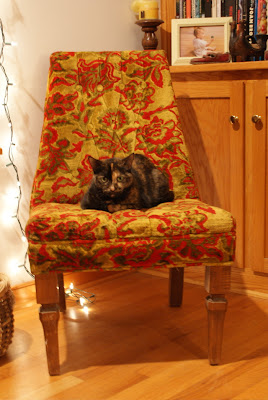 it is not often that i find a piece of furniture that i like or that i can actually afford. i was pleased to remove the glider chair, rarely used these days, and substitute it with this happy addition.

it seems luna cat is satisfied with it as well.
Posted by zoe krylova at 2:28 PM 3 comments 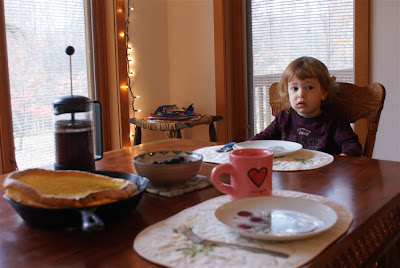 oven pancakes have been a favorite around here for years now. i have been using a recipe in a family cookbook. 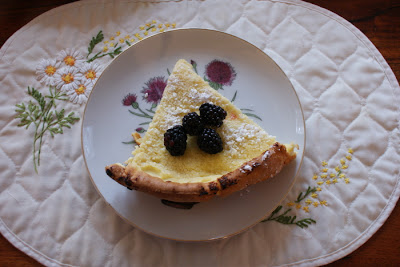 recently i tried angry chicken's recipe. it has double the eggs, half the butter and is cooked in an iron skillet rather than a cake pan. it is more substantial and less, well, buttery. it also doesn't stick to the skillet as it often does the cake pan. mine didn't turn out puffy like hers, but i took it out of the oven ten minutes sooner as the edges were beginning to burn. 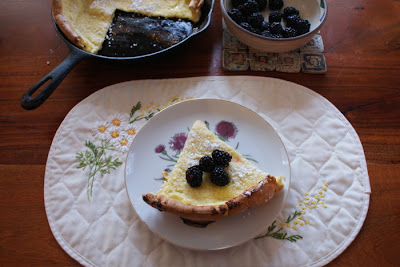 she recommended putting some lemon juice on the finished product. soooo good. i know blackberries are totally not in season. there was a special on them at the grocery store and i caved! 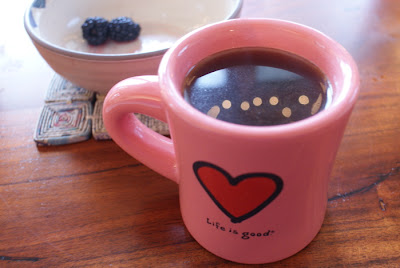 i am trying to head to the thrift store without having a wrestling match with tristan in order to get him dressed. in the mean time, i've told him to bring me his underwear and pants when he is ready. he is happily stuffing all manner of small toys and household items into a bag, his favorite activity lately. i suppose i might never get to the thrift store. but still, life is good.
Posted by zoe krylova at 9:26 AM 0 comments 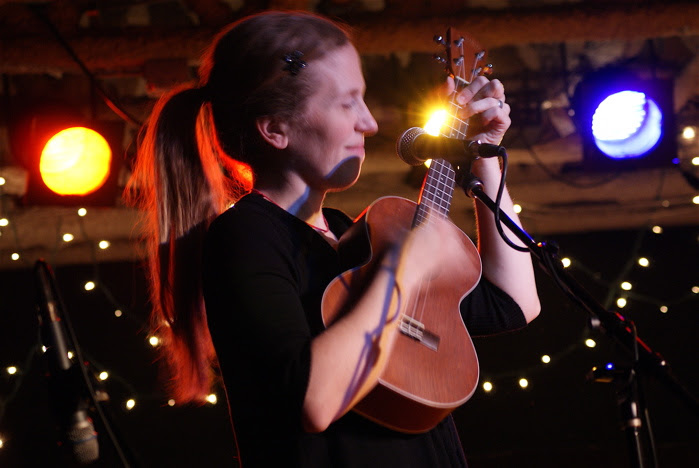 tashi and i escorted tristan to a wonderful kids concert yesterday. elizabeth mitchell and co visited charlottesville's own southern cafe and music hall. it was one of the sweetest kids concerts i've ever attended. tristan was mesmerized. he really enjoys hearing songs he is familiar with, and that was certainly the case yesterday. and he seemed particularly taken by elizabeth mitchell's young daughter, storey littleton, who performs on stage with her mom and dad and assorted family members. 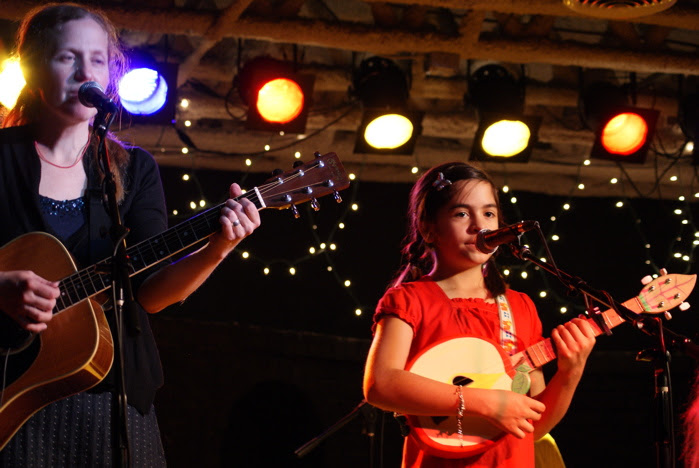 we left the venue with sweet tunes in our ears 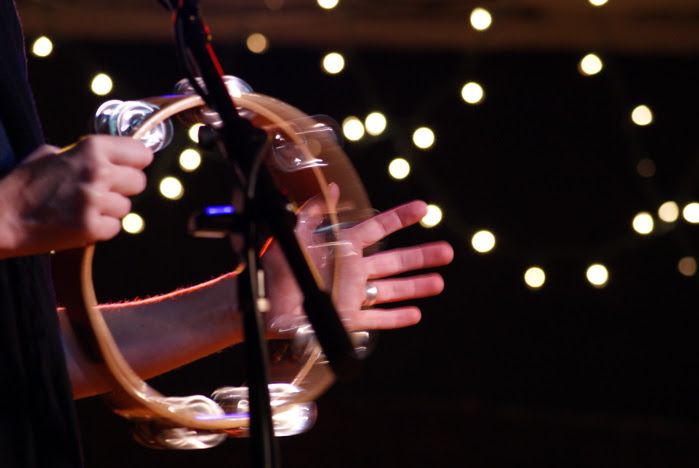 and a sense of contentment 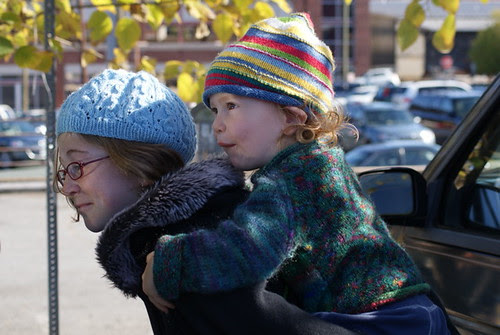 this was one of tristan's favorite songs. we like peter seeger's version a lot too.