when the song inside is shut down 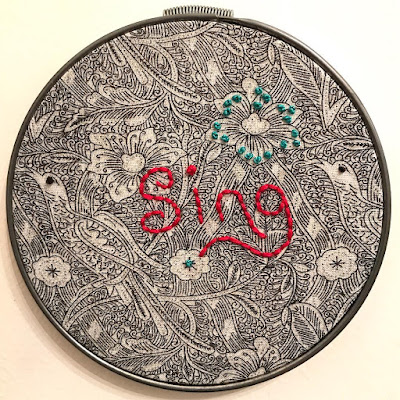 recently i've had opportunity to write words to music.

i don't know if i will ever hear those lyrics taken to the stage or studio, but writing them was enough. i am a moth after alchemical flame, and in those moments, i flitted around a crucible that creates form.

after these song writing forays, i shared the lyrics by also singing them to the tracks provided and making a recording.

please understand, sometimes i don't sing in crowds because i don't want people around me to hear how poorly i sing. so to record my voice to music and hand it to a someone to listen to is a big act of deciding to NOT care.

doing so has brought me face to face with some deeply ingrained musical trauma i experienced as a child. a shut down, if you will.

it makes me wonder how many things have been shut down in all of us. how damaged we all are. how we don't even realize that there is damage. and when a shut down occurs, how we compensate for it in other ways.

music is my emotional track. it's the backdrop and the drive and the story. it's the fire in that previously mentioned crucible of creation. it brings fusion. connection. movement. fantasy. I admire music makers and performers and am recharged by the live experience. i love to dance, though that too is cloaked and choked by self-consciousness.

as much as i love music, and seek it, and have been closely connected to musicians throughout my life, i know nothing of its formalities. i can't name notes or specify structure. i know not a lick of musical language. and i have never actively tried to know. music has been purely visceral for me. an experience of hearing poetry. an enchantment, where priestess or shaman rally the energy to rise. a ritual. a dance. a spell. a story.

examining this love of music, this life of musicians, and wondering why i know nothing about music formally, i recall the shut downs. i don't think i realized until recently how deeply I’ve been altered. how my confidence was utterly robbed.

when i was in grade school, 2nd grade i think, i tried out for chorus. why 7-8 year olds are expected to "try out” for chorus, rather than just encouraged to join, is beyond me. it is a vile structure that should not exist. there was no opportunity for singing with classmates other than in chorus. i tried out because i had the desire and inclination to sing. to make it into chorus we had to sing "america the beautiful" and it was required that we hit the high notes just so. i was not a capable candidate according to the instructor. i did not make the cut. in 2nd grade all singing with my peers was stolen.

from that day forward i believed i could not sing. that it wasn't for me. that i wasn't for it. it wasn't a possibility or even an option.

around the same time, we as grade schoolers were encouraged to pick an instrument and receive instruction from music teachers associated with the school. i had no idea where to begin and so i chose the flute, the choice of my best friend at the time. do i think it was the right choice? in retrospect, no. drums or bass or maybe cello would have been a better choice for me. but i didn't come to that realization on my own. in my first week or two of trying to learn how to make notes from a pipe and finding myself dizzy, a relation who was babysitting me said, "some people have two left ears." for some, she stressed, playing an instrument is "just not meant to be."

the flute was returned, the rental contract ended, and i gave up on the idea of learning an instrument.

what world does that to children? what world doesn't try to help them find their voice, their song, their rhythm, their expression? what world makes a small child try out for group singing in a public school, rather than just providing a space for children to sing, without judgment? what world has people who tell children they are not good enough, even on the first try? i’ve heard stories of children having their hands slapped with a ruler while trying to learn the piano. in this case the whole possibility was slapped away.

of course, i could have toughed it out. ignored them. persevered outside of the school structure. but music wasn’t exactly a calling. not like writing has been. and confidence was not something instilled in me. i was (and still might be) an easy subject to shrink down.

fast forward to now, many decades later, where i am finding that perhaps composing lyrics is a bridge between the poetry i write and the music i love. and maybe it’s ok if i sing poorly. because sometimes it’s more about the power to deliver the message.

so we’ll see. but i’m feeling pretty determined of late to heal the trauma those adults inflicted on a little girl who just wanted to be in the band.
Posted by zoe krylova at 10:06 AM 0 comments